First Fixer is officially up for pre-order! The book will be released on July 31st. 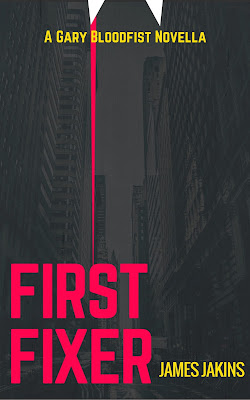 Garack Bloodfist is an orc. A former bandit, warrior, monster hunter. His name is legend in the country of his birth. You can call him Gary.
In the year since they were forced to relocate to Summervale, Virginia Gary has made it his mission to help his extended family of orcs and goblins assimilate into American society.
When he learns of a job opportunity with a construction company Gary wastes no time in securing the positions for some of his fellow orcs. But he soon learns that there were only openings because something had happened to the old crew.
He finds the cause of the crews disappearance when some of them show up, changed, with eyes that turn red and teeth that are a little too sharp.
Gary takes it upon himself to fix the problem, because if he doesn’t who will? He is particularly suited to solving the problem. He does have some experience with stakes and fire after all.
First Fixer is a prequel novella to Jack Bloodfist: Fixer, and the first story to star Gary Bloodfist, Summervale’s first orc fixer.
Posted by James Jakins at Wednesday, July 26, 2017 No comments: