So with January almost over, I decided it was time to let everyone know my plans for the year. I want to be as transparent as possible with those of you that care to know more about what's happening on the writing front. So that's what this post is for. It includes some fun stuff, some maybe disappointing stuff, and some stuff that you'll probably just "meh" at.

First order of business: Paperback and Audio format for Son of Thunder.

Paperback editions of Son of Thunder should be available for purchase by the end of the month. You might be asking why it's coming so long after the release of the ebook. That's a reasonable question. Mostly it's because I've done my best to make sure the paperback has more to offer than the e-book.
I commissioned an artist for some illustrations, and we added some chapter headers. You're only going to see those in the physical copy of the book.
Here's a taste of what you can expect: 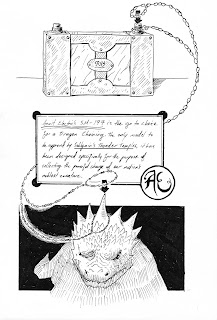 I'm pretty sure it's been worth the wait. I'll announce it when it's officially available, but expect it soon.

Audio edition of Son of Thunder is so close. 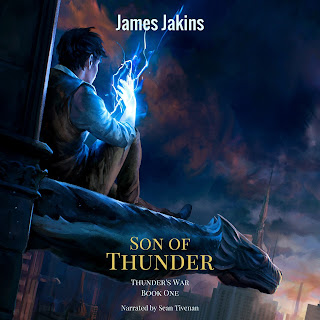 I just finished listening to the narration, and guys, it's good. Like, really good. I know I'm biased, but trust me, it's pretty great.
My first step in getting this audio book ready, was to open it up for auditions. I got some amazing auditions. So many talented people submitted. It almost physically hurt me to make the final decision. Because picking one of them meant I was denying other talent. It got worse when I shared the auditions with friends and family and the vote was split. Same number of votes for all the front runners. In the end I chose Sean Tivenan. In situations where I only have good choices and I can't just have everything, I trust my gut. After listening to Sean's performance, I'm glad I did. I think you'll agree when you hear it.
I'm not sure when this will be available. A few hoops to jump through, but once Audible has approved it, you'll be able to grab your own copy.


Now onto other news. Namely, sequels.

Some of you might be familiar with an orc by the name of Jack Bloodfist. I'm still working on his second adventure. I'd originally promised that would be available last year. Well... Turns out I lied. I swore I wouldn't be that guy, but... Sorry. I'm pushing myself to have it ready this year. I do have a good chunk done, and if there's enough interest, I would be happy to share a few peeks into Jack's next adventure. I just wanted to assure everyone that it is coming.
The second Jack Bloodfist novel is going to be titled Freelancer. In this one, you're gonna get to see Jack face off with a powerful necromancer, angry angels, a renegade demon, and maybe a werewolf or two. It's going to be bigger and better than the first one in every way.
I just hope we all get to enjoy it sooner rather than later...

The other sequel on my plate is, you guessed it, the second book in Thunder's War. Son of Thunder has only been out for a few months, but I've been working on this series for longer than I care to admit. Which means, it's all outlined. Book 3's outline is still kind of rough, but book 2(Working title is Lightning's Chosen) is just begging me to start writing it in earnest. Honestly, I wouldn't be surprised if this beat Freelancer to the printer.

I have other projects in the works, as well, but as far as 2017 goes, I think it's safe to assume that either Freelancer or Lightning's Chosen will show up first. Hell, maybe we'll even see both of them if I manage to write as much as I want to this year. But, don't be surprised if you see something random show up instead. I do have that pirate novel I want to write...

One final piece of news for the year: I have a table at Salt Lake Comic Con Fan X this March. This is my first time as a vendor at this con. My first time as James Jakins the author, and not just attendee #20,346. I'll be selling copies of both Son of Thunder and Fixer. I'll even use my non-existent artistic talent to draw orcs if requested. Doesn't even have to be in one of my books. I'll deface anything if you ask.

Email ThisBlogThis!Share to TwitterShare to FacebookShare to Pinterest
Labels: random rambling, What I'm working on, You should buy my book
Newer Posts Older Posts Home
Subscribe to: Posts (Atom)